Grouse Counting with "Pepsi" The Vizsla 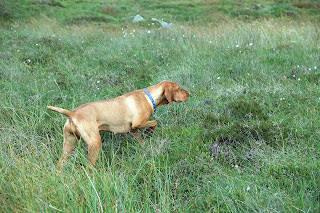 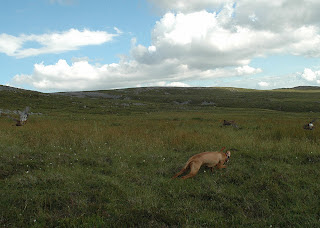 
Whilst chatting with my bank manager Mark who is a keen wildfowler and shooting man the conversation turned to dogs. He has a young 18 months old vizsla puppy who he is getting ready for its first season and he was keen to give it a run in the open after game and see how it pointed and flushed. Ever pleased to keep the bank manager happy I suggested that he came out and helped with the grouse counting. I usually count our marginal ground that we use for smaller walked up days. The ground is still quite high at nearly 2000ft and a mixture of grass, heather and bilberries, but without high levels of grouse, so ideal for a puppy to have its first run out.


Mark arrived after lunch and we transferred all our gear into my discovery for the drive up the fell. Having introduced Pepsi the vizsla to Tia my black lab. We set of to Dufton and took the track past Bow Hall and on up the Penine way alongside High Cup Nick. In the past I have always followed our keeper Frank Dargue off road onto the high fell and left to my own devices my local knowledge let me down and I failed to find the easiest route. Mark was surprised by how rough the journey was and where discoveries can get to, Pepsi decided that it was too scary in the back and transferred to her masters lap. My driving, never my strong point can have this affect it seems on dogs as well as humans.


Having eventually arrived at the bottom of the bilberry plain I decided to walk out downwind over the less promising lower ground and then swing up hill and walk back along the escarpment into the wind where traditionally we see more grouse. Last year I counted 36 grouse in a recovery year for us and I was hoping to count about 80 grouse. On the walk out we saw several signs of grouse from a few loose feathers to quite a few distinctive grouse deposits. However sadly we saw no grouse. I was though impressed with Pepsi, she quartered the ground nicely, but not too quickly and always within easy range of Mark. I was disappointed that she had not had her chance to shine but with our turn around into the wind I was looking forward to the return walk.


Almost immediately upon facing the wind in an area of bilberries Tia started showing signs of grouse nearby. Sure enough just over a small rise in front of us we put up our first grouse. One single old bird that did not look that healthy a rather depressing start. Then suddenly again Tia gets excited and at least two coveys together of 14 grouse fly off followed by another two young ones. What a relief! Quickly Tia puts up a barren pair so I head further uphill and pull Mark and Pepsi more onto the line I am on. Pepsi is working really well into the wind and it is a pleasure to watch her. Suddenly she is on point. Is it grouse or a false alarm with a young dog? Mark moves up behind her, camera at the ready and pushes her forward to flush. After a slight pause 4 grouse wheel off on the wind, Pepsi then remains rock steady. Impressive stuff. One very happy vizsla and one immensely proud master, a lovely moment.

In all we counted 36 grouse almost exactly the same as last year. I did see a lot more signs of grouse particularly on the way back and perhaps got the feeling that we could easily have missed a few large groups in such a massive area. It will be interesting what the counts show up on the main moor. What we did achieve though was Pepsi's initiation and I think that Mark can look forward to some exciting times with this dog. She was equally impressive when doing a few retrieves with a couple of dummies. Mark commented that he wished she ranged a little further but I felt that she was perfect if you were going to shoot over her on rough days yourself. Lets hope that she isn't gun shy and I look forward to watching her again in the future.