Every now and again it is good to get things of your chest and this can prove very therapeutic or so I am told. I hope so, as I am currently stuck on a Virgin train returning from London that was going to get me me to Carlisle at shortly after 9.00am. However, overhead power cable failure has kept us sat in Hemel Hempstead station for some 3 hours. I then asked the guard whether I could have free internet access so that I could put the time to good use and he answered that it was broken and even first class had not got it! However they did keep us informed at all times and the guard signed my ticket for a full refund.

I then took solace in the newspaper I borrowed, the Telegraph and though I appreciate that its viewpoint is conservative, what a depressing experience it proved. In random order I read about a bogus ethnic police commander, upwards of 200,000 young people who will not get university places this year with far better grades than I got, the MPs trying to evade justice by claiming parliamentary privilege, poor retail sales in January sparking a second recession, why we are nearly in the same parlous state as Greece (with Gordon Brown prescribing them austere measures!), an all party group of MPs slating the treasuries handling of the financial rescue (no controls and the banks are still not lending), the number of soldiers who have died in Afghanistan has passed the losses sustained in the Falklands, cold weather has stalled the housing market again.

Sadly this is just one day, one snapshot of life at the moment. It is very difficult at present to keep the sense of perspective and optimism that one needs to be an entrepreneur. The last 2 months have been the worst trading months I have experienced in 20 years running hotels. We had the floods in November followed by the snow of December and January and this coupled with the recession has been a bitter pill to swallow.

I understand the reluctance of everybody to spend money, we all feel uneasy about the future and want the reassurance of something put by for a rainy day. Many people though have never been better off, low interest rates have shrunk mortgages to a fraction of their former levels but most people have opted to leave payments the same and pay their debt off. We are depressed are from the top down. Has there ever been a more sad, less inspiring, leader than Gordon Brown. Tony Blair's virtuoso performance at the Iraq Inquiry just served to highlight the paucity of Gordon Brown's era. What will it take to restore confidence?

At the present we have no leadership, the country is drifting along with a Prime Minister who has been indecisive from the very start and seems to be motivated mostly by the need to be prime minister. He then becomes paralysed by the prospects of taking decisions that might jeopardise his position as prime minister. I have always felt that it is better to fail having tried to do something in life rather than fail for not taking a decision. We all feel that the country is rudderless and we fear for the future as the government hangs on like ostriches with their heads in the sand neither admitting its errors or acknowledging the gravity of the situation. It is not possible to predict the result of a general election, but what is apparent is how desperately we need one whatever the result !
Posted by Nigel Milsom at 08:48 11 comments: 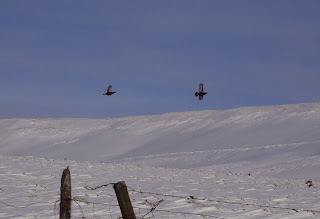 Grouse Shooting at The Tufton Arms
Posted by Nigel Milsom at 07:18 1 comment: